The microswitch opens or closes using mass and buoyancy of float. The two stoppers that determine the control range are user adjustable. 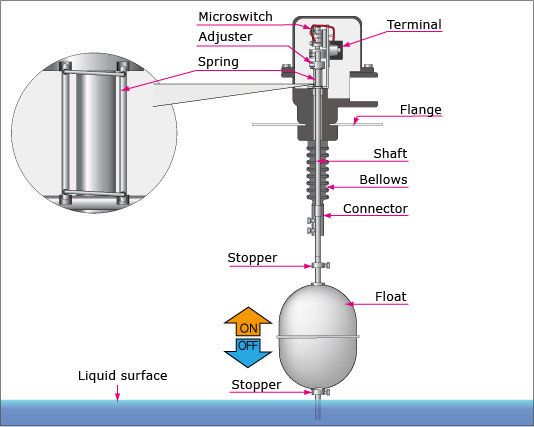 The figure shows the situation where the liquid level is below the float. The shaft is pulled by the float and at its lowest position, and the microswitch is in an off state.

The microswitch keeps the on state until the level falls and the float sits on the lower stopper. The microswitch allows this large hysteresis. The spring supports the shaft and also adjusts operation deviation of the microswitch.

NOHKEN has been producing various non-standard specification or customized instruments apart from the introduced items on Web site.
On your request, we can review possible production of new range of non-std. or customized products as your inquiry.
Please feel free to contact us by phone or mail about it.

Inquiries and questions by email.